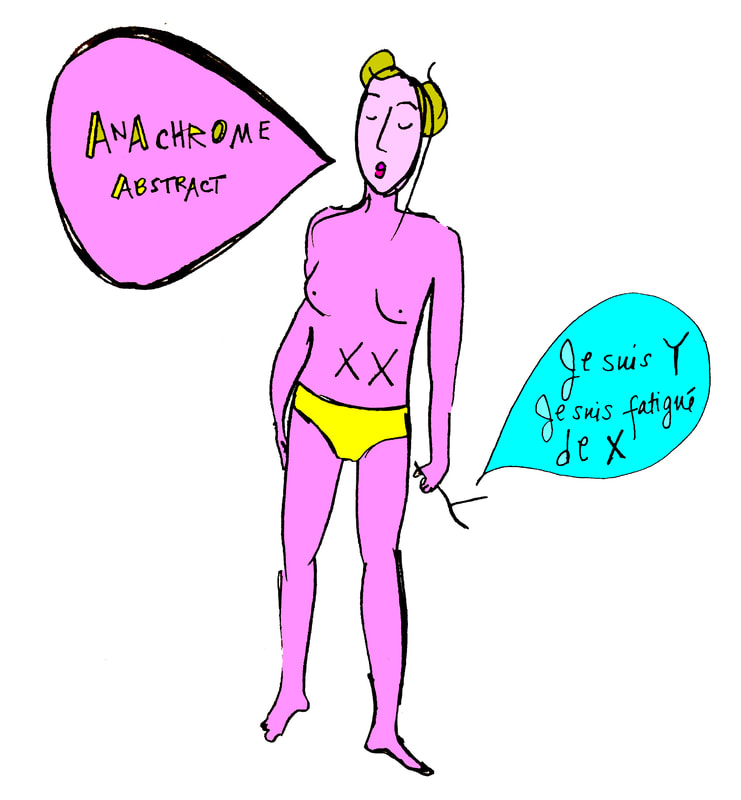 Short description:
Anachrome is an almanac of a period called, among other classifications, “around the year 2020”, when only 3% of the male-determining Y chromosome’s original content genetically remains. Built from all factual science, intense research and interviews, the feminist-futurist literary fiction scrupulously reflects on contemporary biotech culture, but through the colossal lens of geological and cosmological decades. Largely taking place between the prototypical Manhattanite Ana's Bumble date 2 and 3, Anachrome reveals the causal relationship of chromosomes, minerals, microbial life and machines surfacing the question of how do we love now and in the prescribed bionic future.

Character Summary:
Intrinsically breaking all formal molds of structure, Anachrome involves really just one character, a protagonist (Ana, who is VR-- and who sometimes becomesYou).  Ana purposefully remains as undeveloped as possible through a writing style insistent on dismantling the female archetype by providing as little detail about her as possible; sounds charming, no? The book's veracious nature, instead of the Disney trajectory, ekes in clots, insists on spotty form. Writing sequentially both forwards and backwards while comparing Heideggar's time-space to Einstein's Space-time, Anachrome works hard to step out of masculine-derived linear language by crafting its edges daringly around the missing body of what is feminine linguistics, so that emptiness can then speak. Aside from lacking a pre-fabricated outline and obvious denouement (spoiler: the protagonist, Ana, opts for neither of the three modern woman-forward story endings : getting the man, or getting the job, or getting the man + the job), Anachrome still manages to strangely synthesize into highly readable content, IMHO.

Anachrome is a portmanteau, combining anachronistic and chromosomic, underscoring the book’s theme, which largely (and anecdotally) articulates the “Anachronistic Chromosomic Fallout” of the relationship between the XX and XY chromosome. Anachrome also refers to the name of the protagonist, a prototypical Manhattanite named Ana (or—even— Ana Chrome) as she navigates the dating scene near the year 2020. The writing relies heavily on formal, historic science, utilizing the wide-spanning timeline of geological and cosmological eras to justify the contemporary period and its plausible future direction. In a writing style aspiring to be as concise as it is non-linear, Anachrome's storyline includes cameos by Oprah, Gwyneth Paltrow, Elliott Smith, Jeff Bezos, plus organizations from DARPA to the NIH, internet-famed Lifestylists and the intellectual proffering of Siri and Google Adwords. Thematically, causality and relativity theoretically wrestle between Heiddegar’s inescapable human-centric time-space and the sometimes-isolating experience of traveling a world-line in Einsteinian spacetime. Despite its referential weight, Anachrome remains palpably readable through unabashedly honest, feminist-centric sex scenes, revealing the influence of social constraints on (not only the mind) but the gut microbiome. Attempting to figure out what to “do about love” and the classic inclination towards partnership midst man’s evolving bionic romance with metals, the writing traverses through untypical vernacular to land on the epiphany of pleasure, in something like an ending of a Hero(ine’s) Journey. In realms of timeline, the story bumps like an electron, spinning left then right, through the simple interval between date 2 and 3 for protagonist Ana and a right-swiped man she meets on Bumble.