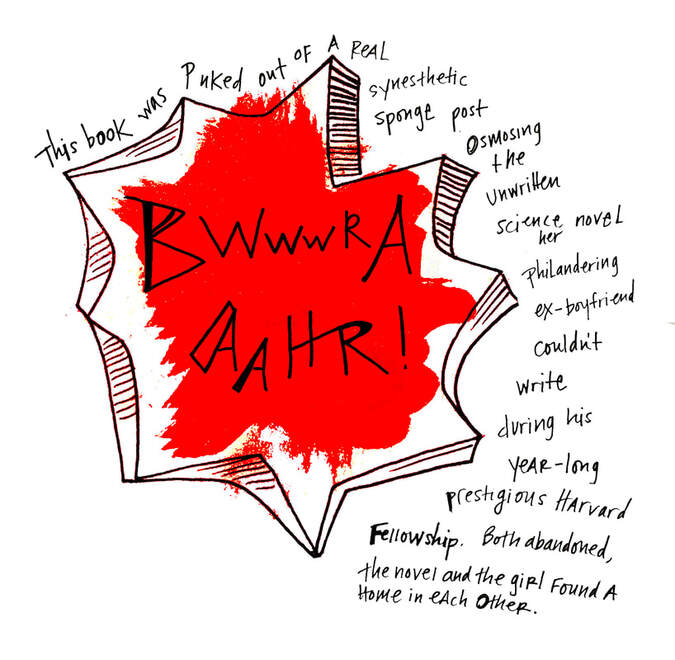 ​I know the above isn't the most mature one-sentence (theoretically two) description for a book, but it, along with an entire bottle of red ink, spilled just now unto my floor and so I've felt obliged to put it to use. Hear accompanying audio, above, as well:  incase one does not know what Bwwwrraaahr sounds like; Bwwwraahr is actually my one-line book descriptor.
"Must a book engage us in a mental construing of things through its imagery? Can't it also narratively organize us around the dematerialization, an incineration, of things?" —ANON (okay, me)
The Paragraph:

Anachrome is an almanac of a period called “around the year 2020”, when, among other biological advents, only 3% of the male-determining Y chromosome’s original content genetically remains. Built from all factual science, intense research and interviews, the feminist-futurist literary fiction scrupulously reflects on contemporary biotech culture, but through the colossal lens of geological and cosmological decades. Largely taking place between Bumble date 2 and 3 of the prototypical Manhattanite "Ana", Anachrome illuminates the causality between chromosomes, minerals, microbial life, sex, machines and social structures, surfacing the question of how do we love now and into the prescribed bionic future.


Plus--- A Character Summary Description:

Intrinsically breaking all formal molds of structure, Anachrome involves really just one character (Ana, a VR protagonist who sometimes becomes You). Ana remains purposefully undeveloped through a writing style insistent on dismantling the female archetype by providing as little detail about her as possible; sounds charming, no? The book's veracious nature, instead of through a Disney trajectory, ekes in clots, insists on spotty form. Writing sequentially both forwards and backwards while comparing Heideggar's time-space to Einstein's Space-time, Anachrome works hard to step out of masculine-derived linear language by crafting its edges daringly close around the missing body of what is feminine vernacularism, so that emptiness can then speak. Aside from lacking a pre-fabricated outline and obvious denouement (spoiler: the protagonist, Ana, opts for neither of the three modern woman-forward story endings: getting the man, or getting the job, or getting the man and the job), Anachrome still manages to strangely synthesize into highly readable content, IMHO. Especially if page-turner, to you, means one page turned, then sleepy-time. Just kidding, kind of.
THEN--- Longest Description:

Anachrome is a portmanteau, combining the words anachronistic and chromosomic, underscoring the book’s theme, which largely (and anecdotally) articulates the Anachronistic Chromosomic Fallout of the relationship between the XX and XY chromosome. Anachrome falls into a tricky post-genre, it uses science and anthropology as foundation from which its fictional departure springs, and safely lands classifiably nowhere near being science fiction (phew); it is more accurately a feministic cultural almanac with a good dose of parody. Exploring the challenge of a teetering period in human design when humanity is "stretched thin by opposite inclinations, part primal, part artificial intelligence",  heterosexual compatibility no longer genetically responds to the type of magnetic forever  minds have been conditioned to seek. Tracing the formation of human hormones to the billion+ year missionary voyage of alchemizing minerals and the stelliferous splay of planets birthed from a tiny, orange-sized galactic core, Anachrome vies to justify entanglement, less in realms of physics, and more in the instance of dating in the nearly-exclusively virtual world of NYC. How can you really wash that man right out of your hair when gut microbiomes, evidently, sniff and seek each other out, on a self-serving quest to cross-bodily bacterially exchange  a little prevotella, for example, for some ruminococcus bacteria? Anachrome playfully presents human neurosis and ritualistic behavior as fortitudinous internal programming operating in eventual parallel with SIRI-like technologies, as we choose, through active usage, what parts of our internal, flesh-and-bone infrastructure we will keep and what exogenous, nano-artificial mechanics we'll ingest, espouse. The assimilative adoption is seamless rather than sudden, and Anachrome outlines how the conception of the cyborg has been gestating since before humans evolved from their ancient mammalian Aardvarkian anscestors. But don't be misled, Anachrome, itself, is barely science; while standing like an unruly Ramona Quimby on a homemade soapbox made of fascinating scientific laws, Anachrome, in fact, evaluates how hard sciences historically split from other areas of formal thought, reveling in ancient mathematician Ptolemy's ability to get away with bearing the professional title of both astronomer and astrologer and sustain a highly regarded reputation. Anachrome aspires to be, at best, made with the softest science, poetic science: which blooms the un-wilting perpetual blossom of a cotton flower. Poetic science doesn't care if you prove it wrong: it was born wrong, annunciating its lopsidedness competitively. While covering the (dominantly male) gender percentile of major corporations and organizations just for "fun", from the (85% male) board of directors of the National Institute of Health to the (100% male-board) International Union of Geological Science, Anachrome brings the cultural climate to a head with cameos by Oprah, Gwyneth Paltrow, Elliott Smith, Jeff Bezos, and internet-famed Lifestylists-- from the metaphysically-touting to the "millionaire-mindset" gurus. While tousling between Heiddegar’s human-centric time-space and the sometimes isolating world-line of Einstein’s spacetime, Anachrome arrives finally upon the one common ground shared by most historic male figures, despite their philosophical or political oppositions-- their proclivity towards misogynistic romps. Then, by the very laws presented by quantum physics itself, Anachrome considers the possible ramifications of distractedly thinking about the other woman while actively "observing" particles in laboratory experiments. Meanwhile, all historic quip begs to hurry up and return to Ana, our neutral, prototypical well-to-do 30-40-something Manhattanite, who sometimes masturbates for a calorie burn, or works assiduously to not think her way out of orgasm, who avoids the pit-falls of search-engine personal data informatics exposure and responsibly programs her mind for affirmative success, even if it requires the most expensive microbiome-zapping, frequency-based spa treatments. Attempting to figure out what to do about the human propensity for intimacy and the classic inclination towards partnership midst man’s evolving bionic romance with metals, the writing travels through untypical landscape to arrive at the simple epiphany of Pleasure as a superpower, as our first (and most inherent) technology, available through the the 8000+ clitoral network nerve endings; it's something like the resolution of a Hero(ine’s) Journey. In realms of timeline, the story bumps like an electron, spinning left then right, simply through the time between date 2 and 3 for protagonist Ana and a right-swiped man she meets on Bumble.
​NOW: after all that hype, let it speak for itself? Here is a link to the full 45K edit-in-process and the first 10 pages. (or: http://www.helperttheagency.com/anachrome_full_and_10.html )