ARTIST INTRODUCTION:
I am Leslie Helpert (USA, Barcelona-based); Composer, Multi-Instrumentalist, Performer, Recording Artist, Visual Artist, Narrative Poet and Teacher of Music---representing herself.
​
​BRIEF BIOGRAPHY:
I was born in New York (1977) into an mobile family who relocated home-base frequently.  From earliest memory, I’ve composed music for voice, guitar and other instruments and I have always illustrated and kept record of my compositions through the medium of paper and ink.  This has been my way to photograph the experience of transience of place; a way to create the sense of home.
I am a principal guitarist who was schooled at The Berklee College Of Music in Boston, Massachusetts.  After finishing college, I was hired to perform my own music (guitar and voice-based) as well as early American Jazz in hundreds of venues throughout North America, Bermuda and the Caribbean, eventually branching out to perform in Europe and Northern Africa.
I’ve played in venues like The Palau De La Musica (ES), The Theatre Lino Venture (FR), The Fox Theater (USA) and many others.  I’ve written over 1,000 pieces of lyrical music kept in Strathmore bound notebooks.  Filling over 40 notebooks with lyrical and illustrative compositions in the last 10 years alone, I etched songs and musical ideas in my own code within these books.   Strathmore papers endorsed me with a lifetime supply of sketchbooks in 2011, in which I continue to write.
In 2008 I was elected by the ministry of Art and Culture in Bermuda to be the country’s premier Composer-in-Residence and this past year, in 2013, I was elected by The Danish Art Council to do the same.  I’ve lent my voice to companies such as Universal/Motown and Sundance films and have recorded over six records on different labels worldwide.  When I am not on tour performing/recording, I teach voice and therapeutic music at conservatories around the world, on Skype and in my home studio.  For me, working with ink and paper, watercolor, Asian ink, wax crayon and various mediums has been a distinct core to my sonic work and professional focus.

INSTALLATION CONCEPT FOR GALLERY SPACE
The design of my installation was created around the desire I have to reveal the core of my lyrical/visual/musical work by creating an exhibition that allows visitors to step into the genuine world of the female composer’s process.   Specifically, I believe that to relay the subtle quality of the “secret universe” within a composer’s sketchbook and to reveal how the writing within these books turns into a public expression of performed music would be very intriguing for the public.

COMPONENTS OF THE INSTALLATION:
The installation will involve a backdrop which will be a single-frame video of my hands flipping evenly through each page of every book.  This frame will be on top of another occasionally-changing background single-frame video which will show a handful of various scenes (fire, nature, city scape, etc.) to represent the contrasting geographic areas and settings where the writings have taken place.  The video of my hands flipping through each page of my books will give the exhibition viewer a visual understanding of the contents of the books more deeply.  The symbol of the background frame of the handful of scenes will represent the connection to humanity and nature that the writer (me) taps into through her art.   The even timing of each page turned by my hand will symbolize the way in which the artist experiences time’s passage which is a contrast to the kind of time that is more typically factored through minutes, seconds, hours, etc.
There will be an interactive audio/visual component to the installation, where the viewer can wear headphones and listen to various compositions while physically flipping printed pages of my original illustrative writing of each song.  This way they can first-handedly see the process of how I write, illustrate and edit my work while listening to the final recorded piece of music.
This interactive element of the installation will be positioned in front of the larger sculpture-like positioning of the 40+ books I’ve filled.  During the course of the exhibition, the pages of the books will be regularly turned so that the viewer can look specifically at certain pages within each book.  The viewer will not be able to touch the actual books themselves; the books may be featured under glass or in another fashion which makes this specifically clear to the viewer.
I will have larger-scale pieces of independent “pages” of the sketchbooks hung on display.  These “pages” will include works I’ve exhibited at galleries previously or have made as private commissions that stand independently from being part of a whole sketchbook.   They are a more “blown-up” expression of the same type of content found in the pages of the books I’ve filled.  These pieces are narrative (often including elaborate writing)  as much as visual, and serve as extensions of my sketchbooks.   Depending on the wall space for the exhibit, I envision around 20-30 of these larger pieces mounted on wall space.  I envision that some of these poster-size pieces will be made as prints and sold during the time of the exhibition.  It is also possible to duplicate the few select songs that I record for the interactive audio-visual part of the exhibit and sell that in a CD format, as well, as a special edition made specifically for the specific gallery space.
There is the opportunity of allowing the installation to also serve as a performance space, also, organizing select movement/dance/musical/multi-media performances involving myself and many top-professional artists with whom I work in Barcelona, inviting others to create inside the inspiring space of the installation.  Depending on the interest of the museum to extend the installation into an active performance piece, I would be available to create special solo performances within the installation, involving my guitar, paper, poetry, ink and visual rendering.  One idea is to create a 24 hour musical performance within the installation and to build a special “cocoon” like space for the performance to take place in, including various elements of sound and design.
Until now, these sketchbooks have not been shown to the public at large, and my visual work has been the most intimate expression of my writing process.  However- at this point I am called to share these books in the form of an installation, bringing my work to a new level of public offering.  Ideally, I would like to permanently house my sketchbooks inside the museum, and lend the totality of the books to the museum for the duration of however long the museum would like to be in their possession.

LAYOUT OF SPACE:
The installation can be within one medium-large area or a main area and can be laid out like this:  (see below diagram on following page) 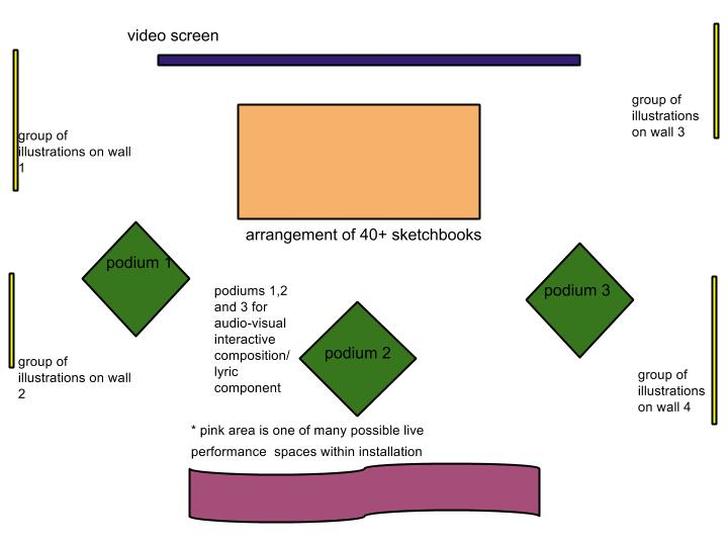 BUDGET:
In the case that the gallery/exhibition space is interested to continue with the prospect of this installation a complete budget can be laid out that calculates the approximate cost of its rendering.  I will need to understand and establish the financial arrangement between the artist and the museum and how the installations at the gallery are typically financed.  I've much experience with the accounting and fiscal management of art endeavors.
​
VISUAL EXAMPLES:
The following examples are just a few in hundreds and hundreds of pages of visual/narrative work available for the installation.

1. example of a random page of compositional writing in one of the 40+ filled Strathmore books. 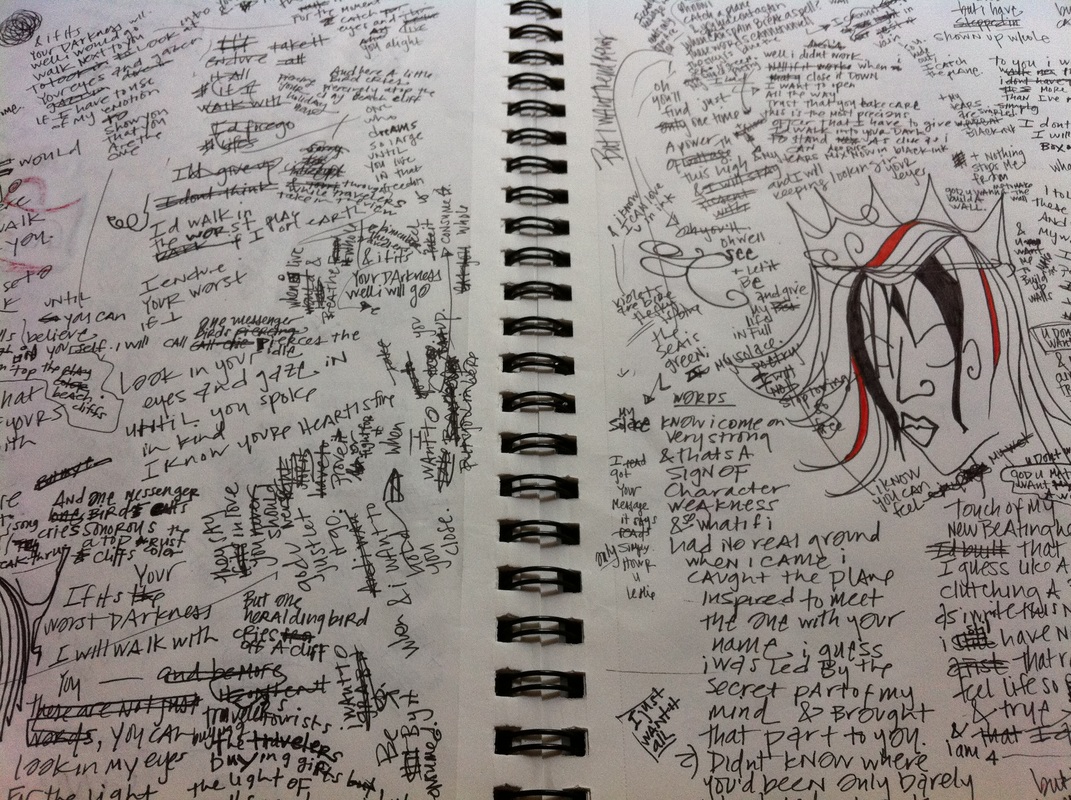 2. example of finished piece of art/projection for music video (2015) rendered from book's interior: 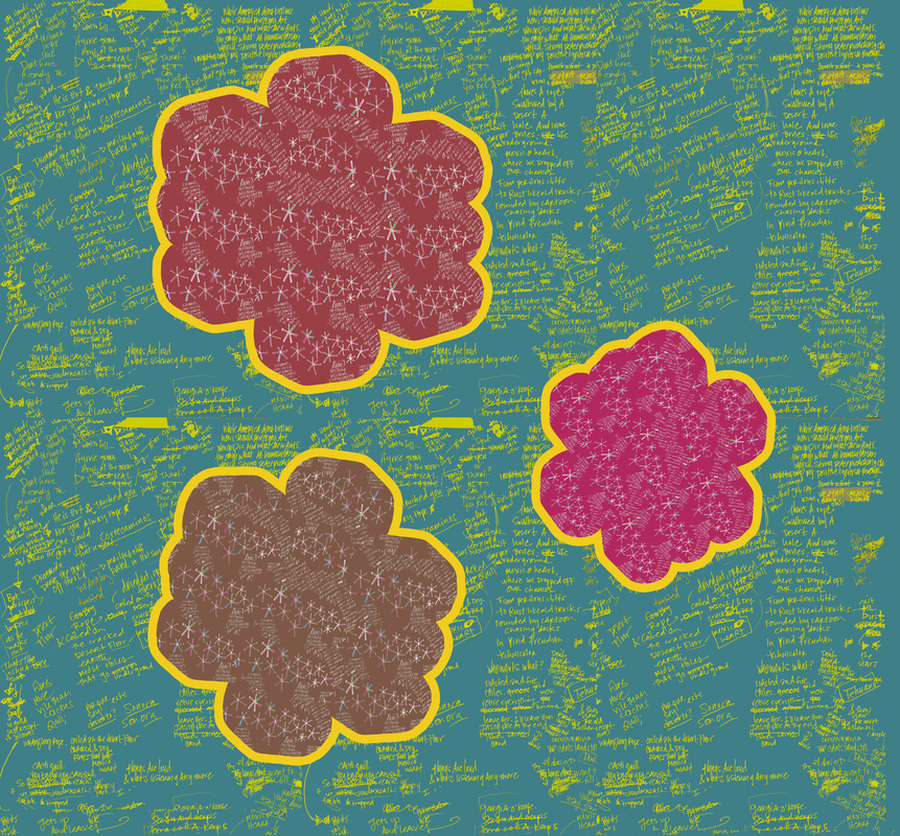 3. some of the sketchbooks open/closed on a table 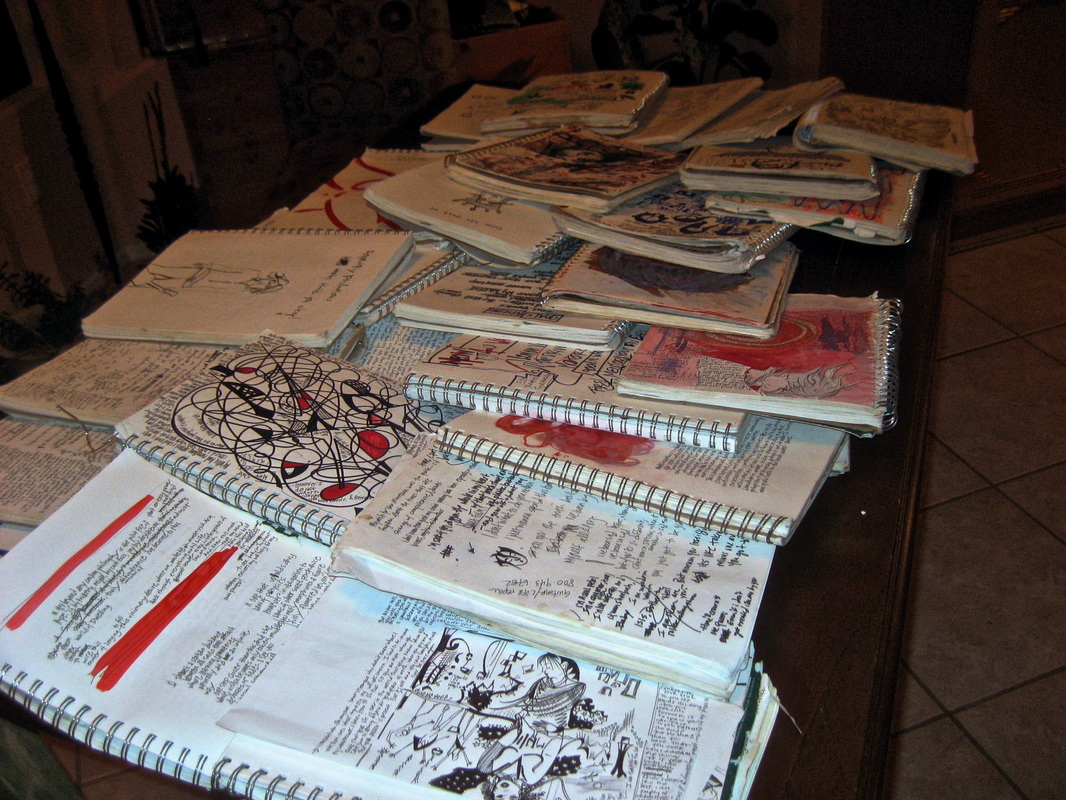 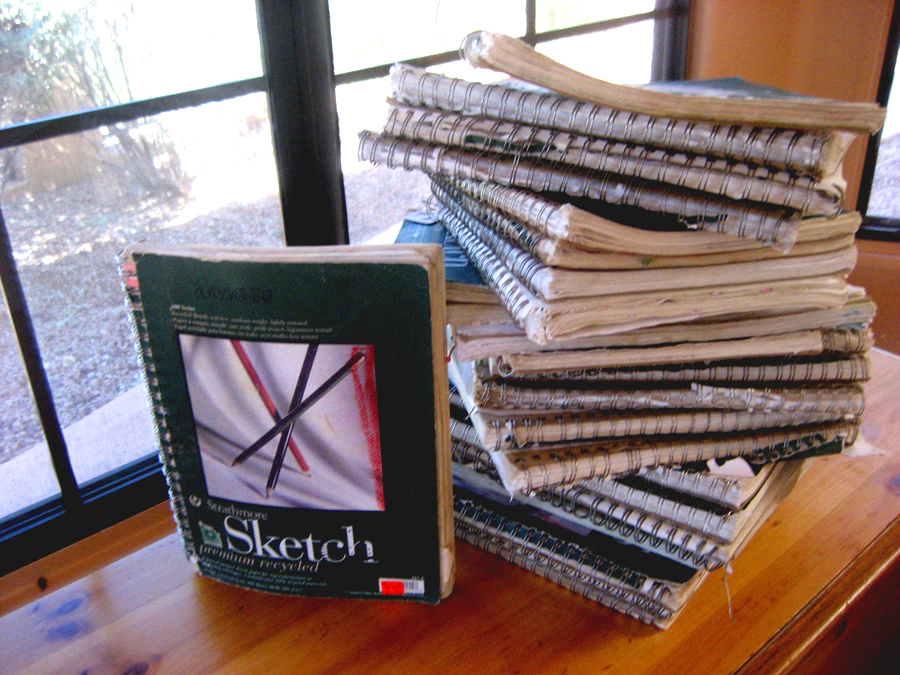 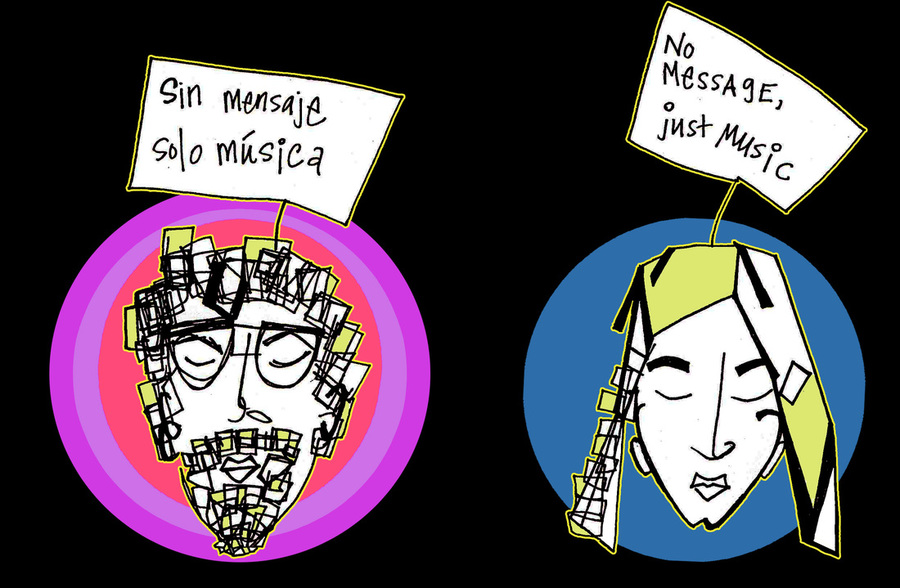 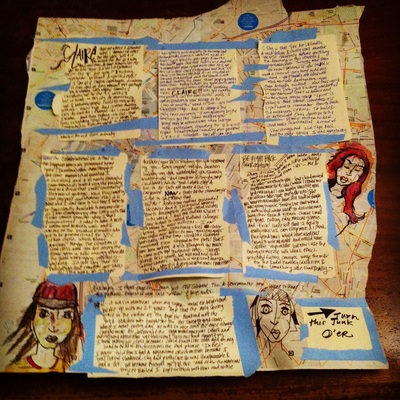 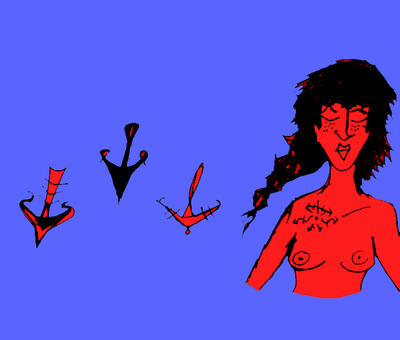 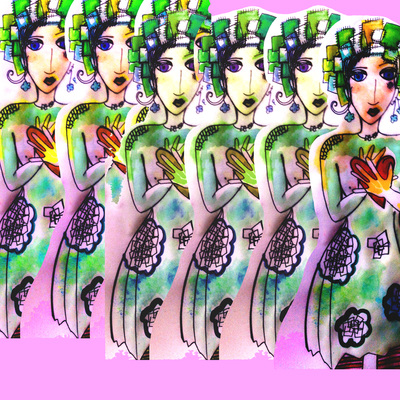 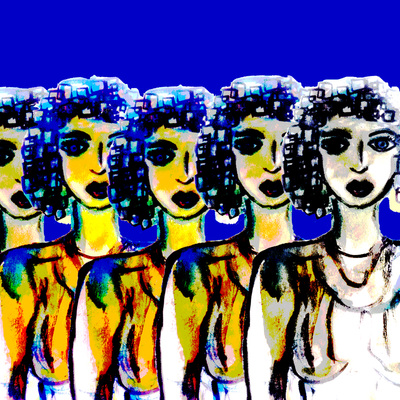 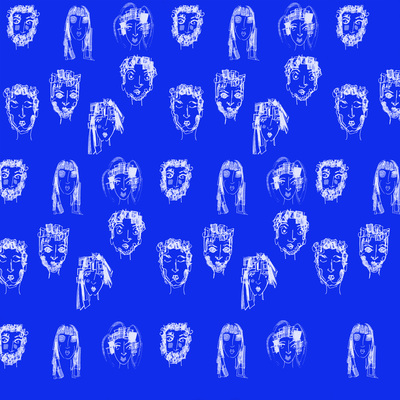 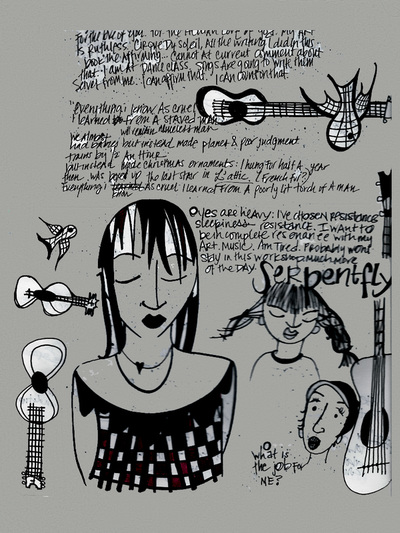 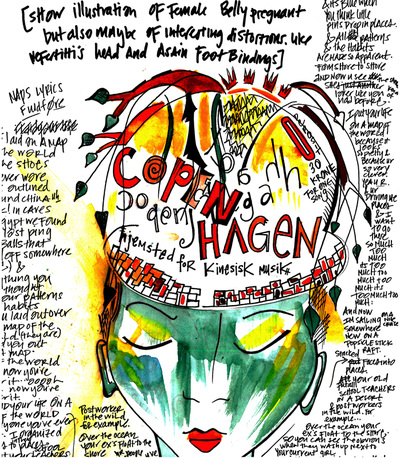 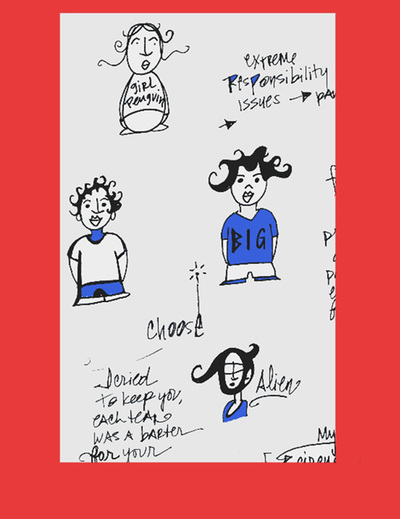 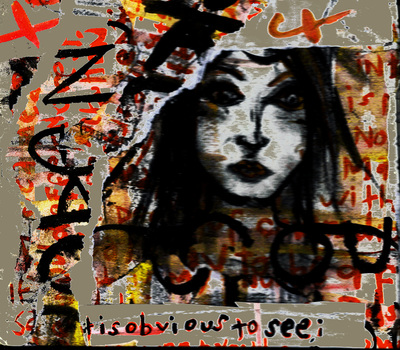 In Copenhagen, a quick flip through one of my compositional sketchbooks, to the music from my 6th record, 2012 release.
TENTATIVE, SPONTANEOUS (SLIGHTLY WHIMSICAL) NAMES FOR PROJECT (APT to ALTER or EXPAND):
A Visual Den of Exploration Into the Audio Work /World of HeLpErt, An illustrative Composer.

A Primitive Look at 21st Century Socio-Influence on the Uncouth Expedition of The Female Artist; Emerging Through Masculine Language.

(There are about 100 more working titles for this concept/creation, which I would like to utilize also as part of the installation, itself.
Also, there are many more visuals I can share upon request...and more can be found here, as well.)